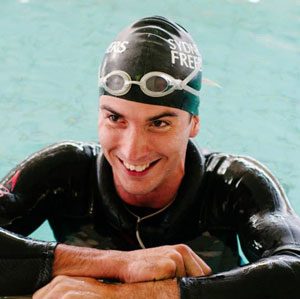 Growing up i was never a good swimmer

Despite my parents repeated attempts at swim squads and nippers i never found any interest in swimming on the surface, preferring to sink to the bottom of the sea and pushing along the sand much to the annoyance of my teacher. After being introduced to the underwater world through snorkeling i was immediately hooked and spent many summers exploring reefs across Sydney’s northern beaches.

This eventually led onto spearfishing in my teens and then to a career in SCUBA as a means of getting the most i could out of the ocean, having earned my instructor ticket i used it to travel through south-east Asia and was immersed in some of the planets most biologically diverse environments.

During my travels i crossed paths with a few freedivers and after a few days of practice decided to ditch the tanks and get back to my roots. Returning to Sydney in 2010 i soon joined up with the Sydney freedivers club and began my training , starting from rock hard plastic fins, boardies and not much of a breath hold then to now years later competing at an international level and coaching the next generation of freedivers at the club.

I love freediving for the connection you build with the ocean and its creatures, the pure silence of the deep ocean and to challenge myself in ways i could never imagine.

hope to see you soon