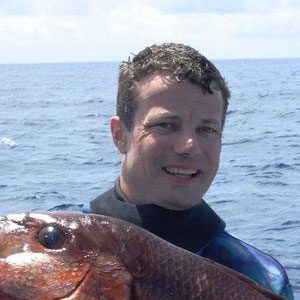 Almost having drowned when he was 6 years old Simon has gone on to show many thousands of spearfishers on how to improve their approach to spearfishing  including National and State Champions, Simon brings 40 years of spearfishing knowledge to his classes.  Simon is at home in the water whether it be catching crayfish by hand in the shallows or pursuing pelagics in the open water.

A champion for spearfishers safety and their rights to fish, Simon has represented spearfishers in their right to dive along the east coast, and was a key person in establishing truer Grey Nurse Shark numbers, and habitat sites in NSW; has run countless workshops on ethical and safe spearfishing presenting to fishing clubs, cultural groups and schools and many Expo’s; co-ordinated the peer acclaimed  “Don’t put your life on the line” Spearfishing DVD with over 30,000 distributed and over 800000 views on YouTube;  Simon was one of the creators of the National award winning USFA Handbook for Spearfishing again featuring safety and ethics; the innovator of the “One Up One Down” safety message seen nationally; started the first safe “pairs” spearfishing events in NSW; played a key role in the “look out Diver about” prop strike safety campaign by NSW RMS; has written over fifty published articles based on his spearfishing experiences, opinions, spearfishing values, ethics, safety awareness, the spearfishers rights to fish and how it all should be managed. He has received acknowledgement from NSW Fisheries for his efforts.

Simon has been accredited with Erez since 2007 and has taught hundreds of students during this time with his partner in the training Andrew Harvey who both really believe in the buddy system of diving as well as focussing on proper breathing and relaxation techniques divulging decades of knowledge in hunting techniques and water skills during the course to their students. Simon keeps the Spearfishing workshops entertaining and with any luck by the end of the course you are going home with dinner you landed yourself.

Thanks again for all your time and effort put into not only the course you are running but also the industry in general. Andrew and yourself are single handedly changing the perception on spearfishing in Australia and that is commendable. For me the course was well worth it and will have no hesitation in recommending it to others in the future.

I have just completed the spearo course with Trippa and Andrew and what can I say accept that it was the best course I have ever completed in the water. The knowledge that is shared on breath hold technique , spearfishing , equipment and in every aspect of the sport is beyond belief. On completion of the course you are provided… and email addresses for both instructors whom want you contact them with any questions you may have about increasing your skills in the water. If anyone is serious about becoming a competent spearo do the course . Great blokes who had all the time in the world for you and wanted you to share the same obsession that they have.